🚨 Putin is a war criminal. Russians are bombing hospitals. 💔🇺🇦

I wanted to connect a keyboard-mouse-combo to a virtual remote desktop running inside a Docker container.

I have a wall-mounted Android tablet displaying always-on content (“info screen”) in my home: 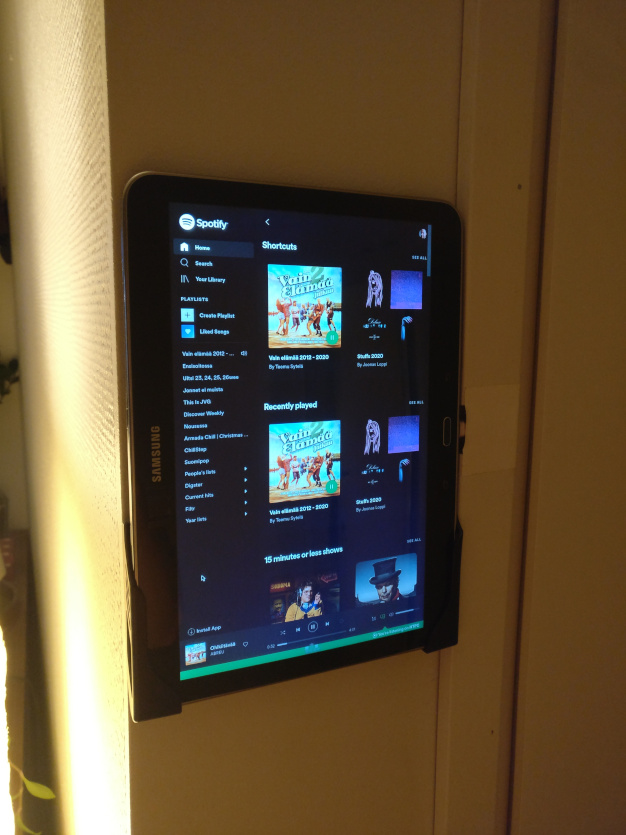 For security reasons the tablet can’t reach the internet and actually has a VNC viewer that displays a virtual framebuffer from inside a Docker container on my server. Here’s the conceptual overview:

I wanted to attach a keyboard to the “tablet”. The thing is, the tablet’s only USB port holds the charger cable. I could maybe rig up a USB hub, but that’s not pretty. I had an idea: what if I could connect an extra keyboard to my server computer that actually hosts the virtual screen, and logically connect the keyboard to that graphical environment?

The thing is, the way things usually work is that there’s only one graphical environment inside an OS and all keyboards and mice (= input devices) are automatically “digitally wired up” to that one. Here’s what I mean:

What I wanted to do

This didn’t seem to be easily possible at first: (it’s a rare use case, I know)

In my particular case I’m using screen-server for the container and here’s the main components inside that make up its graphical environment:

I kept searching if there’s any config option where either Xvfb or x11vnc could grab only a specified input device. I didn’t seem to find any. There’s probably good reasons:

evdev has low-level support for our use case

Turns out evdev has this concept of “grabbing”, which means that you can open a handle to a keyboard/mouse(/combination) and grab it for exclusive access. The technical option name is EVIOCGRAB (I can’t seem to find documentation for it).

This means that only you are receiving the input, and everyone else reading that same keyboard will receive nothing. Once you close the keyboard (or your process crashes), the OS un-grabs it and thus cleans up it for you. Very nice :)

evdev represents each input device as a file that regular programs can read from. I can list input devices simply by listing files in a directory:

Reading from the input device in grabbed mode

Let’s take some (Go-flavoured) pseudocode. You can open the device just like a regular file. The magic is adding the EVIOCGRAB after you’ve opened the file. It’s usually issued with a function named IOCTL (“I/O control”).

I’m not sure if there exists a universal solution

Universal solution would have to be done at X11 server level because that’s the one who’s reading the input that gets delivered to the GUI applications. It’d have to be done in one of these ways:

Grabbing specific input devices is implemented for X.org - there’s evdev support and a GrabDevice option, but it doesn’t seem to be implemented for Xvfb. They’re both X11 servers, but different implementations (for different use cases). Summarized:

Input (and grabbing) doesn’t seem to be implemented in Xvfb:

But since I was using a highly specialized environment (screen-server), I was ok with adding specific code to do this input device grabbing (and delivering) for my project.

So the rest of this article discusses a DIY-code solution.

The user has to map the keyboard inside the container with $ docker run argument --device /dev/input/by-id/usb-Logitech_USB_Receiver-if01-event-kbd. One could also bind the whole /dev/input device tree (= all input devices), but since those can be used to keylog, for security-wise it’s best to only map the required devices.

The code I linked to earlier is only receiving the input events. I had to also code how to react to those as well. I wanted to just “pipe” them inside the X11 server (in my case, Xvfb). Turns out keyboard/mouse handling in X11 is quite complicated, so I used X11’s XTEST extension to pipe the input, because it made everything simpler (I didn’t have to track which window is active to send input to correct window etc.). I found out about XTEST by reading xdotool source code (a tool for sending “fake input”).

You’ll have to read documentation for screen-server about how this is configured (I’ll not post it here in case it gets outdated), but there’s config option in screen-server to specify which input device to map inside which virtual screen (the software supports multiple screens). It works quite well.

To recap, we just “mapped” a physical keyboard inside a virtual GUI environment - but we had to write DIY code for it. As far as I’m aware there isn’t an off-the-shelf way that works with Xvfb.

Linux has its downsides (you have lots to configure and to understand), but it really goes to show you that there’s a facility for many niche needs. Contrast that to Windows, I couldn’t imagine Windows enabling me to have a container with a virtual display and a minimal GUI environment and a specific keyboard inside of it. Sure, you maybe could cobble up something similar, but you really can’t control how all of it’s composed and Microsoft gets to decide when the individual components are removed / stop working.

Stay updated on my blog posts & projects - sign up for my newsletter. 🚀
No spam, unsubscribe any time. RSS also available.